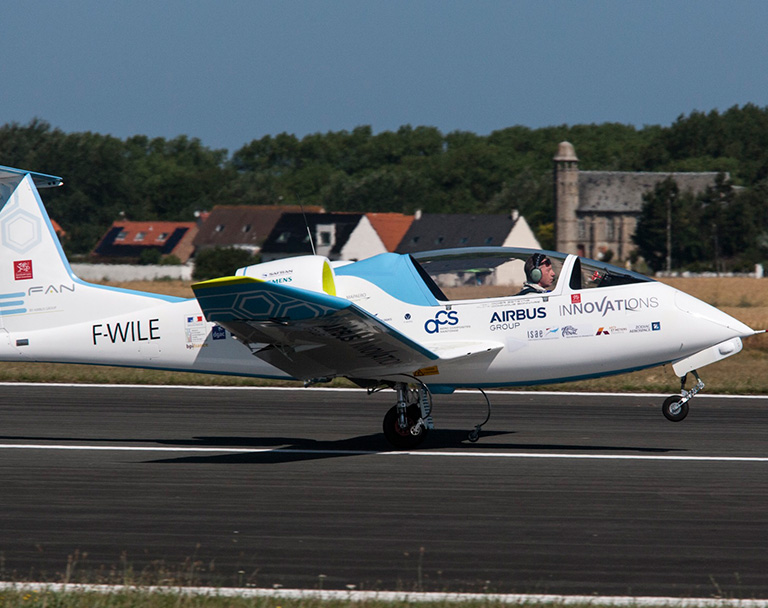 During the flight – the first such crossing by an e-aircraft – PERSEUS enabled up- and downstream HD (high-definition, 720p 25 frames/sec) video telemetry over standard, publically-accessible 3G mobile networks, with a more than 80 percent bandwidth reduction compared to traditional technology under similar conditions.

This made it possible to transmit terrestrial HD video to the cockpit, and allowed personnel aboard the chase aircraft and on the ground to view the E-Fan’s flight progress, as offline content and camera feeds from the crossing were down-linked, encoded and distributed in real time via 3G networks to Android- and iOS-connected devices.

V-Nova’s contribution to the E-Fan’s Channel crossing results from its new partnership with Airbus Group – a global leader in aeronautics, space and related services – to explore aerospace applications for PERSEUS, which provides high-quality, high-compression encoding and decoding of data – at significantly faster speeds and the same or lower latency than traditional technology – using commercial-off-the shelf (COTS) hardware.

“The ability to demonstrate up- and downstream HD video telemetry via 3G networks to a moving aircraft under highly dynamic operating conditions is a testament to PERSEUS’ robustness and its broad applicability in multiple industries, including aerospace. We are proud to be exploring these applications together with the Airbus Group and see great potential for the relationship,” said Guido Meardi, V-Nova CEO & Co-Founder.

The successful video telemetry for E-Fan’s historic flight demonstrates the wide range of potential aerospace industry uses for the PERSEUS technology, including transmission of high-quality video content between the ground and aircraft, the handling of flight-critical data for trend monitoring and aircraft optimization, wireless distribution of in-flight entertainment (IFE) throughout commercial jetliner cabins, and more.

“PERSEUS’ highly effective data compression also opens opportunities for additional services, such as an ‘enhanced or virtual’ black box that could store more data, or provide real-time critical information via the cloud,” added Eric Achtmann, V-Nova Executive Chairman & Co-Founder. “Another possible application could be for continuous live video observation of the cockpit or cabin for security purposes, with this hierarchical software enabling users to adjust the level of video quality and bandwidth required ‘on-the-fly’ as situations evolve.”

PERSEUS has been developed and tested over the past five years within an Open Innovation, interoperable coalition of over 20 global industry leaders, including Broadcom, Dell, Encompass, Hitachi, Intel, Sky Italia, TataSky, VisualOn, and WyPlay, to name a few. The PERSEUS software currently is offered in the form of bundled hardware, embedded software, codec plug-ins and silicon IP.

Since its April 1, 2015 launch, V-Nova has already enjoyed impressive successes, and was recognized with the coveted National Association of Broadcasters (NAB) “Best of Show” Award.

With its 74-km. flight from Lydd, England to Calais in France on 10 July, Airbus Group’s E-Fan technology demonstrator became the world’s first all-electric two engine aircraft taking off by its own power to successfully cross the English Channel.